I was looking hard to find a good examples for a young fashion designer with migrant background and I found an interesting interview in the Sunday Times "Style" supplement of June 20th, 2006 about Camilla Skovgaard. She is a very successful shoe designer in the United Kingdom and did it in spite of her migrant background and a hearing impediment. Inspiring and motivating for our Fashion Talk topics! 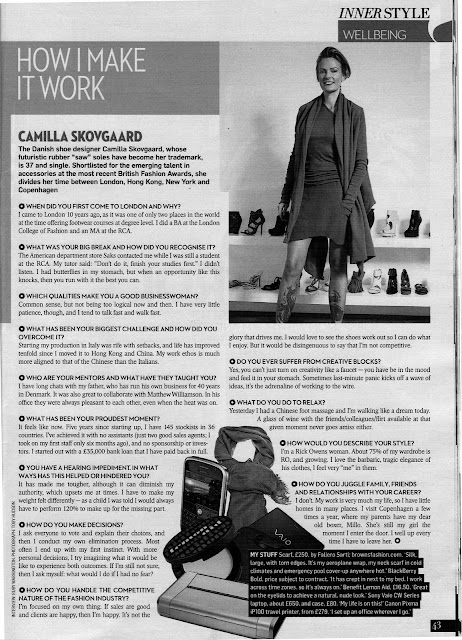 For those of us who missed the Berlin exhibition of Fashion Talks: The exhibition is in Frankfurt now at Museum für Kommunikation (Museum for Communication) until September 2nd, 2012: http://www.fashiontalks.de/english/index.html .

Their Blog is really interesting and full of exciting fashion pictures, though not in English but in German language only.  The graphic above is the header of the blog - nice!

The Museum is also offering workshops for children and young adults - perfect holiday programme!
Posted by Karin at 2:31 PM 1 comment:

Yesterday a very exciting experience in Vienna: I met Melek, a young Turkish woman (age 30) - actually one of these tough  Viennese power girls - who is together with her sister (age 25) the owner of a store in Vienna specialised in fashion services. My visit war on recommendation of a fashion shop owner in the center of Vienna who contracts Melek and her sister for fashion shows when special preparations are needed for acessoires, make-up, nails and hair.

The store is in a rather run down, multi-cultural area in the 16th Viennese district - so not specifically an area where fashion services are in demand (one might think). First it looked like one of these innumerous studios for nails and cosmetics, but these two ladies are very successful and really creative and clever in their way how to "sell" their fashion dedicated services: They organise their marketing via the web and online instruments like Groupon and their service orientations seems to be honored by the market: a full appointment book and eight (!) employees is not so bad for two women younger than 30. From their education they are a hair dresser and a "nail designer".

Was their migrant background any specifically good or bad? Did it help, does it bring additional clients? Was it a barrier? "No", says Melek, one of the young ladies, "not in my opinion. We come from a very modern Turkish family and were free to do what we want as a profession", but she admits that their job and how they organise it is rather unusual for Turkish families of their social background and young women. Their clients are 80% Austrians and the rest mainly Serbs and other nationalities. And the success factors? Melek is not sure, but she states that the service is the most important thing and that they try to be a meeting point for those interested in fashion and fashion services.

It seemed that doing something with beauty in this area with so many empty shops and neglected houses covers a need of people living there. Is it possible, that fashion can have a social component in a surrounding which is disconnected from the wealth and glitter of the big city? May be these are the success factors for their business: Melek and her sister cover a need of the people in their district, and they are extremely ambitious. They simply WANT to do something in fashion and found their individual way to do it in a surrounding which is neither very attractive nor fashion orientated.
Posted by Karin at 12:16 PM No comments:

This is a collection of our project results, each of them described in an individual post as well.
This overview serves as a center for downloading the individual documents:


Other results:
Presentation of the country report from Portugal
A song text written during the night activities in Berlin


For the last “Fashion-Talk” meeting in Vienna, April 16th, I made an online-research about the topic ‘young immigrants as consumers or designers of fashion’. I also had two days in Vienna to finish my research by talking to relevant people and taking some pictures. 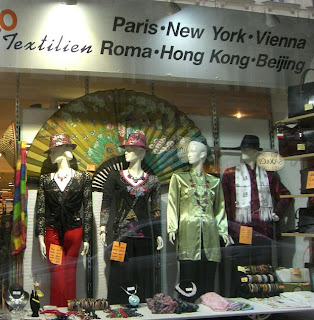 I travelled through the whole city centre and found some interesting places and shops there. To me Vienna seems to be a very modern and international city.
In the city centre you can find a lot of fashion shops, boutiques, and retail chains. 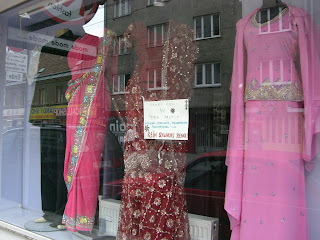 You can compare these shops to the shops in
Germany, so it is also possible to combine the research about Germany with pictures from Vienna.


If you walk through the many small side streets you can find some second hand shops and also international fashion.


Young immigrants as consumers of fashion

Because most of the juveniles with migration background have a low level of education, you
could say their identification with their friends and with their ethnical background were more distinctive than between German juveniles. The Shell-Study of 1997 shows, that juveniles with a low graduation identify themselves more often with special groups.

One important way to show the membership to a special group is to have the same style and wear similar clothes. Their ideals are often musicians or actors found on TV. Hip Hop musicians e.g. are often Afro Americans with dark skin, so to some juveniles’ minds it is also cool to have a migration background. 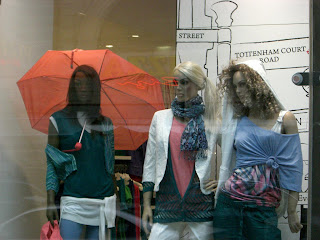 On the one hand many immigrant juveniles try to accommodate to the German members of their peer-group by wearing the same clothes, but on the other hand many German juveniles are wearing Hip Hop clothes to show their membership to this kind of subculture dominated by immigrants.
Fashion is not longer affected only by the upper class, trends and styles of youth subcultures or immigrants also influence it.
In some shops you can find display-dummies with a North African or Asian appearance. A producer of these kinds of display dummies 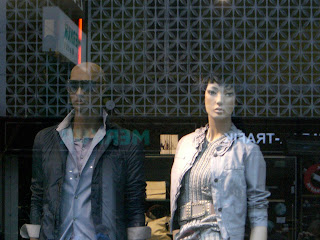 explains, that shops showing these dummies want to express internationality. These dummies, either with a North African, an Asian or a Latin American appearance, are mostly produced for young-fashion shops.
Gudrun M. König, professor for Art and Culture from the University of Dortmund points out, that the prestige of immigrants enhanced because of the high educated immigrants, who came to Germany with a green card. The different nationalities of display-dummies also express the development of society.

The biggest part of immigrants in Germany is Turkish. Because of their Islamic religion especially women have some rules about their clothes. That’s the reason why there are more and more Islamic-clothes shops in Germany. 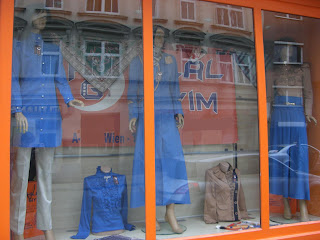 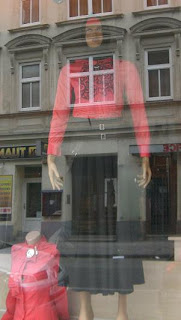 These shops sell e.g. head cloths, long skirts, tunics and Abayas, a kind of long coat.
Some Muslim women want to show their religious affiliation by wearing Islamic clothes. It doesn’t mean automatically religious repression.
Also young Muslim women, who are emancipated and modern, wear this kind of religious clothes to show their membership to the Islamic religion. They are proud to be Muslim and with these clothes, which cover the whole body, they find a way to show it.

I made these pictures in Vienna. In Austria you can find Islamic-clothes shops as well. In these shop windows you can see the Islamic fashion in bright colours with a modern look.

Examples for immigrants as designers

In Bamberg there is a project called “Mode macht Mut” (“fashion encourages”), which helps women with a migration background to work as sewers and designers. Most of them have already learned the most important skills in sewing. To participate in this project let them improve their skills and give them a chance to earn money. Some of them are single mothers and a certain job is very important for their families.
The project also backs up sustainability, because all used materials are either second hand clothes or sponsored fabrics, which are going to be new designed.
If this project will be successful, there is a chance to develop the project to a business   company. 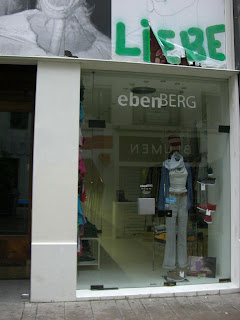 In Vienna there is a similar possibility for migrant women to work with fashion.
The fashion label “Made IN – Made By” has chosen female immigrants as their target group to employ them and protect them from poverty. In 2010 the label won the Austrian Social Impact Award.

The label was founded by four young women, some of them also with a migration background.
The multicultural background of the whole team is shown in the clothes’ design and the diversity of the team members is seen as enrichment for creativity.
The label focuses on economically and ecologically sustainability as well. There is a strong preference for local resources and a local production of the clothes.

The picture on the right shows the shop of one of the founders of the label, where the clothes of “made IN – made BY” are sold.
You can find this shop in Vienna in Neubaugasse 4, near Mariahilfer Straße. 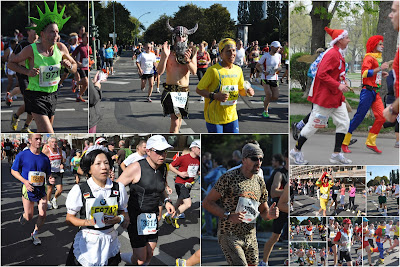 The day before the last project meeting in Vienna the biggest running event of Austria happend: the Vienna City Marathon.
During the meeting we spoke about fancy clothes of runners and I achieved to get some pictures - not from Vienna but from Berlin Marathon 2011. (in Vienna the weather was rather cold and nearly rainy).
Some may call it crazyness, others call it fashion, probably all will find it funny!

Posted by Gerhard at 1:34 AM No comments: